Warning: Use of undefined constant get_links_custom - assumed 'get_links_custom' (this will throw an Error in a future version of PHP) in /homepages/16/d172852903/htdocs/greeneroo/wp-content/plugins/google-sitemap-generator/sitemap.php on line 178
 Think New! Think UnCharted! | Greeneroo 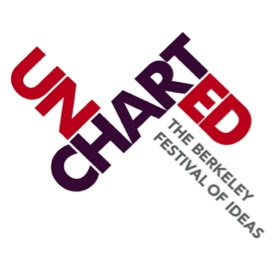 UNCHARTED: The Berkeley Festival of Ideas

Uncharted: The Berkeley Festival of Ideas is the Bay Area’s first “ideas festival,” a dynamic two-day public program featuring some of the world’s great thinkers taking on some of the world’s great challenges. The bold exchange of ideas from an extraordinary and varied line-up of speakers, experienced as a series of conversations and interactive workshops, is presented in a festival-style program, combined with exceptional dining and drinking opportunities and exciting Berkeley locations, all delivered at a substantially lower cost than other “idea” conferences. Uncharted, presented by Berkeleyside, happens on October 24 and 25.   **  Tickets are now on sale, with an “early bird” reduced price available for a limited time. **
At Uncharted, new ideas are viewed through the diverse lens of over 40 prominent thinkers representing technology, science, culture, politics, education, economics, the environment, food and all aspects of our lives. There are no “talk-to-you” lectures: at Uncharted stimulating conversations and creative exploration dominate, and participants are encouraged to participate. This interaction goes even further in “Uncharted Lab” sessions when collaborative brainstorming as a group is the format. And attendees are challenged to consider bold provocative new concepts by speakers during “Mind Bomb” presentations.
“Uncharted provides people who are passionately engaged with ideas with an opportunity to engage with some of today’s most provocative, pioneering thinkers,” said Lance Knobel, curator of Uncharted. “The Bay Area has become the world’s leading crucible for important new ideas in so many areas, and Uncharted is the only ideas festival in the region.”
Northern California’s Bay Area is renowned as a hub for creativity and innovation, making it a natural place for an annual gathering of exceptional thinkers who push boundaries and ask questions.

Uncharted, which launched last year and is produced by Berkeleyside, Berkeley’s independent news site launched in 2009, grew from Berkeley’s well-known tradition of challenging the status quo while looking toward the future with optimism. Uncharted evolved out of the belief that the most intriguing ideas – and solutions to today’s big challenges – emerge from the collision of different visions and perspectives. The 2014 Festival represents the blossoming of this concept.

“Participating in the inaugural Uncharted last year proved to be a thrilling introduction to Berkeley for a recent transplant from the East Coast,” said Nicholas Dirks, Chancellor, University of California Berkeley. “On full display was this incredible ethos of innovation, curiosity and abhorrence for the status quo—the foundational elements of what makes this town and its university so unique. A perusal of this year’s line-up makes it evident that Uncharted is picking up right where it left off; great news for anyone interested in unconventional wisdom.”

The Uncharted Festival takes off in downtown Berkeley’s Arts District on Friday, Oct. 24, and lands that evening at a bash in UC’s exclusive University Club, high atop Memorial Stadium. Sessions resume on Saturday, culminating in the closing session on Sunday afternoon.                  Tickets are now on sale, with an “early bird” special price of $290 available for a limited time. The price includes both days of programming plus Friday evening’s gala. One-day passes are available for $205, also including the gala. To purchase tickets, see the complete list of speakers, and find out more information, please visit www.berkeleyideas.com.

Who is headlining at Uncharted?

What happens at Uncharted?

What’s on the program at Uncharted?
Here’s a sampling of conversation topics:

What is the vision for Uncharted?

Uncharted aims to be one of the world’s leading ideas festivals along with TED, the Aspen Ideas Festival, London’s FutureFest, and Sydney’s Festival of Dangerous Ideas.

Uncharted is produced by Berkeleyside, Berkeley’s independent news website. One of Berkeleyside’s founders, Lance Knobel, has a wealth of experience organizing some of the world’s major business and political meetings. He was Director of the Program for the renowned World Economic Forum Annual Meeting in Davos, and has been responsible for the programs of The New York Forum, the APEC CEO Summit, and The New York Times’ DealBook Conference.
Sponsors for Uncharted include Autodesk, Cloudera, DeYoeWealth Management,Berkeley Repertory Theatre, GreenerPrinter, University of California Berkeley, Berkeley Startup Cluster, Downtown Berkeley Association, and KQED.

Visit the Uncharted website  (www.berkeleyideas.com) for  more information and to purchase tickets.
Watch Video from Uncharted 2013 and hear more about the festival.
Follow Uncharted on Facebook; and on Twitter  (@UnchartedIdeas) to keep in touch and for program updates.