Warning: Use of undefined constant get_links_custom - assumed 'get_links_custom' (this will throw an Error in a future version of PHP) in /homepages/16/d172852903/htdocs/greeneroo/wp-content/plugins/google-sitemap-generator/sitemap.php on line 178
 Castle Rock Geology | Greeneroo

Rocks that change and flow!

We think of rock formations as solid and unyielding, but Castle Rock has great examples that help us undertstand how much influence the elements can have and how this entired area is changing.  Vaqueros Sandstone is the name of the formation underlying Castle Rock State Park.

It looks like it might have once been pudding, or melted and bubbled – it has a special name- TAFONI. These intricate patterns result from the different erosion rates of the harder and softer regions within the sandstone. The harder regions with more calcium stay cemented together, while the softer regions with less calcium erode away. This formation might also remind you of fossilized sponge or coral.

TIMELINE: this entire area was once a broad sea floor, 30 to 40 million years ago. It was once a marine shelf, the sediments were deposited before the San Andreas fault existed.

The falls continue pushing the changes in the park: Phil Stoffer of the USGS in Menlo Park says

“In winter and spring, Castle Rock Falls, on Kings Creek near the Saratoga Gap trail, plunges about 80 feet down the rocks. Vaqueros Sandstone formations are found at spots around the Central Valley and at locations in the northern and southern Coast Range. Whether it was all originally formed in a single location and then broken up is not known. It could have been formed by similar conditions off the mouths of many ancient rivers during that era. In many areas, Stoffer says, the formation is just a few feet thick. But in the Santa Cruz Mountains, it crops up in a uniquely coherent mass, more than 2,000 feet thick.

The sandstone, a mix of quartz and feldspar crystals lightly glued together with organic compounds from ancient sea life, continues its journey today. Tectonic upthrust here matches or exceeds annual erosion, so the stone moves ever higher, and elements migrate within the rock, dramatically sculpting the shapes of exposed knobs of stone. Rainwater infiltrates the rock and dissolves calcium carbonate and other glues within it, then transports them back out to the rock surface via capillary action. Here they harden and armor the outer surface with a shell up to several feet thick. Meanwhile, unglued inner grains crumble, hollowing the outcrops from within.”

The sculpted shapes have built the large and distinctive forms of Castle Rock itself, Goat Rock, Skull Rock, and other smooth and bulbous nodes that attract and awe hikers and climbers. Some pictures of GOAT ROCK follow. 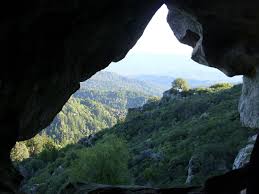 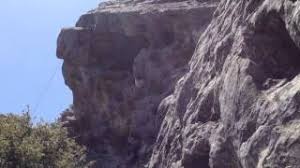